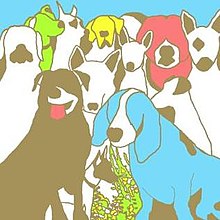 Property of The Vanity Label

Before Nate Ruess was thrust in the spotlight with the band Fun, he was in The Format, which was a hidden treasure of great music. The album Dog Problems is a combination of upbeat sounds and rather deep lyrics. I find that there is a great variety to each song and Ruess’s voice is very unique. One of my favorite songs on this album is called Snails. It has some rather strange lyrics that I didn’t quite understand, but it refers to an incident where Ruess’s thought his mother had an accident while hiking. The song alludes to the bittersweet feeling he got finding out that someone else had fallen off the mountain, but his mom was safe.

Devin’s Hell or Heaven rating is 1-5 stars, 1 being absolute hell, or worse if you can believe it and 5 being more awesome than if junk food was actually healthy for you. The Format’s “Dog Problems” get 4.25 stars, which is like having a 7 day weekend.

Something missing during your break? Play our top five for the week of March 9, 2016!